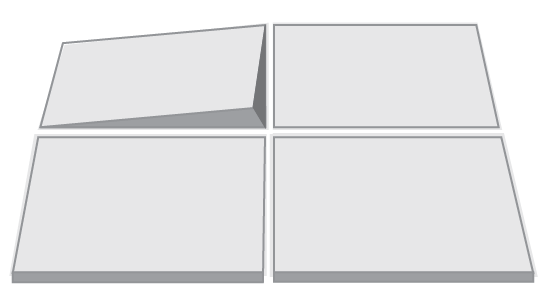 From choosing a tile to completing the installation, customers and installers need to be aware of how the final project will look once the process is complete. Each tile is a different thickness and a slight variation is to be expected from one tile to the next. In the days before isostatic presses, warpage was more common. Today, many mass-produced tiles have exceedingly little warpage. However, variation and slight imperfections still exist. This is why regulations need to be followed to ensure the job is done well and the customer is satisfied. But what are these regulations? This white page defines the laws of lippage and will equip you with the knowledge that will give your customers a peace of mind when they are selecting their tile.

In order to understand what is an acceptable variation in the height of adjoining tiles let us first define what lippage is. Variation in the height of adjoining tiles is called lippage. This is defined in the ANSI (American National Standards Institute) standard "Lippage refers to differences in elevation between edges of adjacent tile modules." The ANSI standard voices the perception of lippage is influenced by many factors such as:

In addition, variations in the plane of the substrate will also affect lippage. In many cases, when tile is installed with thinset over an uneven substrate, the installed surface will not meet lippage standards.

Now that we know what lippage is and why it is important for tile to have little variation in height from one tile to the next we must understand the exact laws of allowance.

Allowable Warpage of a Tile

The ANSI standard defines allowed warpage according to the type of tile. For a paver tile (commonly used on floors) the allowable warpage is defined as follows:

The warpage of each tile in the sample shall not exceed 1.0 percent along any edge nor 0.75 percent on either diagonal. From this formula the allowable warpage can be determined.

Allowable Warpage on an Installation

The reasoning of the standard is to define reasonable lippage from one tile to another. When a single tile is warped but within standards, all of the corners cannot be set in the plane of the adjoining tiles. Therefore, the tolerance for variation from tile to tile includes the actual warpage of the tile. If there is no warpage, the lippage should not exceed the value in the table.